Since the early nineties, Christopher Muller has resolutely pursued an independent pictorial approach that centres around the notion of the "still life". In assuming the representational tradition of Claesz, Flegel, Chardin, Manet, Morandi etc., he does not however merely reproduce their pictorial forms using the contemporary medium of photography. Muller's works much rather rearticulate the pictorial form of the still life in a "realistic" manner by extending its semantic framework.

The size of the photographs, in which the objects are shown approximately life size, is a significant and absolutely characteristic feature of Muller's approach. The objects are thereby awarded an illusionistic presence. Moreover, the assumed facticity and tactility of the objects are heightened by the absence of both a passe-partout and a classical frame that would distinguish the depicted objects as something deliberately aesthetic, distinct from the ordinary experience of material objects. The photographic paper, bonded directly to the back of the virtually invisible, matt perspex sheet using the Diasec process, is hung directly on the wall, thus effectively realizing the traditional pictorial ideal of the opened window, the "finestra aperta" formulated and illustrated by Alberti among others.

Muller's still lifes are not simply formalist photographs that repeatedly depict the same view of various individual objects in serial form. In his photographic set-ups of everyday objects he is much more concerned with the interrelationships between the objects and their resulting psychological resonance. For this purpose he uses ordinary, at times even trivial, objects familiar to us all. Having carefully selected the objects, he rehearses the pictorial arrangement in dozens of preliminary drawings. Consequently, he produces only relatively few works. In contrast, for instance, to most of Bernd and Hilla Becher's students, his images are never created in a serial context, but are individual pieces. The still lifes arising from this carefully considered process are characterised throughout by a relatively shallow pictorial depth, which increases the intensity of the encounter and enhances their sense of reality. The objects appear as if presented on a stage, lined up in a paratactic structure, i.e. non-hierarchically, so that the eye ceaselessly wanders over the generally horizontal picture plane without ever finding a central compositional focus. Thus, new formal constellations are continually formed, which can in turn give rise to unspectacular short stories, constantly revealing new contextual frames that oscillate between a staged and a non-aesthetic, "real" reality. The complex pictorial structure is based on formal characteristics and associations. It points, as the artist himself has stated, "towards a possible structural reading of the picture, but there is no easily identifiable hierarchical pattern of perception and understanding. The relative simplicity of the object's design makes it possible to discern clear formal correspondences, and the object's lack of symbolic significance allows the viewer greater freedom to make associations of his own.” (1) The banality and complexity united within an aesthetic context sharpen the awareness for that which is usually overlooked. In a certain sense, Muller acts as an advocate for the objects. To the same extent, however, he also reflects on the individuality of human beings when he explains, "The viewing process reflects moments of self-awareness – as emotional content is inevitably linked to the responses and projections of the viewer.” (2)

1. Christopher Muller, statement, in: exhib-cat. Peter Weiermair (Ed.), The Measure of all Things, On the Relationship between Photography and Objects, Ursula Blickle Stiftung, Kraichtal, 1998. 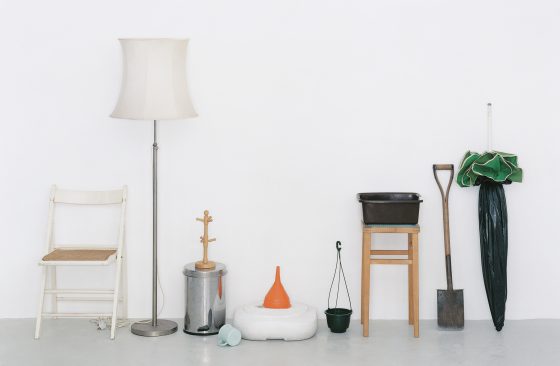